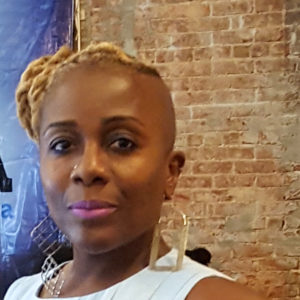 Sharon Beason began her extensive career in the corporate world as an accounting professional and designated Certified Public Account (CPA). As she continued to progress in her profession, she decided to leave her very lucrative corporate career to become an entrepreneur.

Between February 2006 and 2009, Sharon served as the Director of the Downtown Women’s Club – Brooklyn Chapter. She was tasked with organizing engaging and creative networking events for professional women. Sharon was instrumental in making the Brooklyn Chapter, the Club’s most successful offshoot and was declared, “one of Brooklyn’s favorite entrepreneurs” by L Magazine.

In 2010, Sharon founded Brooklyn Exposed and in 2014 she re-branded the company into the Social Fix – a comprehensive events listing website.

Then in 2015, Sharon founded WOMENEUR™ in an effort to provide tools, resources, advice, events, motivation and community to help propel the growth of female entrepreneurs. She Leads Africa — an online community that helps young African women achieve their professional dreams — selected WOMENEUR™ as one of ten Instagram accounts that “breathes life into your career.”

“I had an amazing and very successful journey owning Brooklyn Exposed and Social Fix, which lead to a plethora of AMAZING business relations… not to mention press access to tons of cool events Lol. But I put them to rest to give my heart and soul to Womeneur!”

“During my 9+ years as a serial entrepreneur, I’ve learned SO MUCH and I want to give back and share it with you!”

Sharon has been featured in major publications including The Daily News, The New York Times, Time Out New York, She Leads Africa and Black Enterprise[/vc_column_text][/vc_column][/vc_row]